The process of “Balancing” is the removal or addition of weight to the unit such that this effective mass center line approaches the true axis.  In addition to dynamically balancing rotors, pulleys, shafts, and tooling for the spindle motors we manufacture and repair, we offer dynamic balancing services for all types of rotating equipment to 250 pounds.  Contact us for your balancing requirements.  Great location in Rockford, Illinois, not too far from Chicago, Madison, or Milwaukee.

Excessive vibration in rotating machinery can cause unacceptable levels of noise and reduce the life of shaft bearings. Some cause of vibration, or unbalance, will remain even after dynamic balancing.  We use our Schenck state of the art dynamic balancing machine to reduce this unbalance to a level (ISO G2.5 in machine spindles) that will not adversely effect the bearing life and will reduce noise levels to an acceptable level. The process of reducing the out-of-balance forces that cause vibration in rotating machinery is called “Balancing”. The unbalance is caused by an effective displacement of the mass center line from the true axis caused by some mass eccentricity in the unit.

We Built a Clean Room

We offer top notch repair services for your manufacturing needs.  To improve on our already high level of service, we have built a clean room dedicated to organization, functionality, and cleanliness while servicing your tools.

Check out this gallery of photos that takes you through the construction process, all the way up to its use today.

The simplest form of “Static” balance involves placing the unit on low friction bearings and allowing it to rotate and “settle” with the “heaviest” point falling to the bottom. Material is then removed or added to balance the weight of the rotor.

If the unit being balanced is very short in relation to it’s diameter Single-Plane Balance will, normally, be acceptable. If you consider a shaft with two bearing ends, it is quite likely that the major unbalance will arise in the two bearing ends, caused in part by the inherent concentricity errors. The two “heavy” points may fall in precisely the same angular position but, more likely, they will not and, thus, the displacement of the mass center lines from the true axis will be a different orientation in both ends, as will the size of this displacement. If the unit is now being balanced by the Static or Single-Plane method, as it can easily be, the overall effect would appear to be correct on the Balancing Machine but, in operation, since no account has been taken of the vibration between the two ends, a “Force Couple” will exist which will again introduce vibration in the two machinery shafts.

Our Schenck balancing machine has its bearings connected to sensors which detect the “heavy” point, in relation to a datum on the unit, while it is rotated. This increases the sensitivity and the accuracy of the balance. The correction at a single position along the length of the unit is said to be “Single-Plane Balance”.

Dynamic balancing must be performed. In this case the balancing machine will have both sets of bearing pedestals connected to sensors and the unbalance at the two planes can be independently identified and, thus, corrected. By the use of electronics and computer control, the actual correction planes can be at any convenient position along the length of the unit relative to the running bearings and, in the case of very long units, more than two planes can be considered, although this is rarely an advantage unless the unit is to run at speeds above its lateral critical speed (“Super-Critical”).

For units which will operate well below their lateral critical speed and which are considered “stable” with regard to the speed of operation (a category into which all but the longest flexible couplings fall), there is no necessity for the balance operation to be performed at the actual running speed. Because Balance Grade, whether it be specified as Q0.6 or 4W/N for example, considers operational speed when the calculation of the actual permitted physical amount of out-of-balance is made, balance at a speed much below the operational speed will result in the same final level of balance.

If the unit is to run Super-Critical then the actual characteristics of the unit, after passing through the critical speed, may well be different to those below it, hence, such units should be balanced at running speed.

A final complication arises if a unit is to operate at speed close to its critical lateral frequency. In this case there may be some finite movement of, say, to shaft section of a coupling and, hence, it becomes important to balance such a unit at the final running speed. In addition, if this unit is to be subject to multi-speed operation, such as might occur in a two speed motor driving a fan, then balance must be performed at both speeds with a compromise between the two unbalanced forces being made.

It should be appreciated that however close to the ideal the coupling is balanced on the balancing machine, this will change when mounted between driving and driven machines – albeit only slightly. As it is impossible to achieve zero unbalance, all rotating elements will have an inherent error so that, when cojoined, each element will have an influence to increase or decrease the overall balance of the train by a small amount.

Unbalance occurs in a rotating machine when the mass centerline and the geometric center do not coincide on each other. Unbalanced rotors generate vibration which may damage their components. In order to extend the life of the machine, vibration due to unbalance must be reduced to acceptable level. Despite the ability to reduce unbalance to low levels, these levels or limits must be defined. It would be uneconomical to exaggerate balancing quality requirements. However, if the balancing quality is underestimated, it would reduce machine reliability and availability. Moreover, sometimes demanding overqualified balancing reduces machine availability by consuming necessary time in unnecessary balancing.

r = distance from unbalance mass to shaft/rotor centerline (in m)

The unbalance force generating the vibration is expressed as:

Following is a short cut for the steps 3, 4 and 5. Instead of using the graph to look up the specific unbalance value for a given G number and service RPM and then multiplying by rotor weight (taking care to use proper units), U can be calculated by using the following formula:

Have a tool you need balanced?  Let us know:

We Are Focused On… 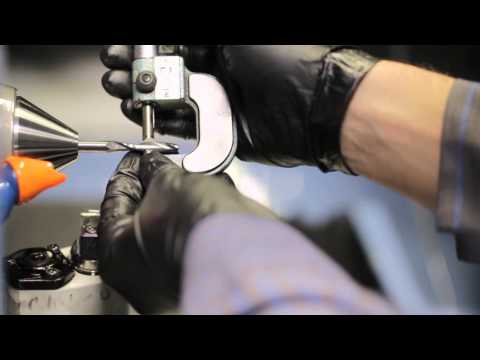